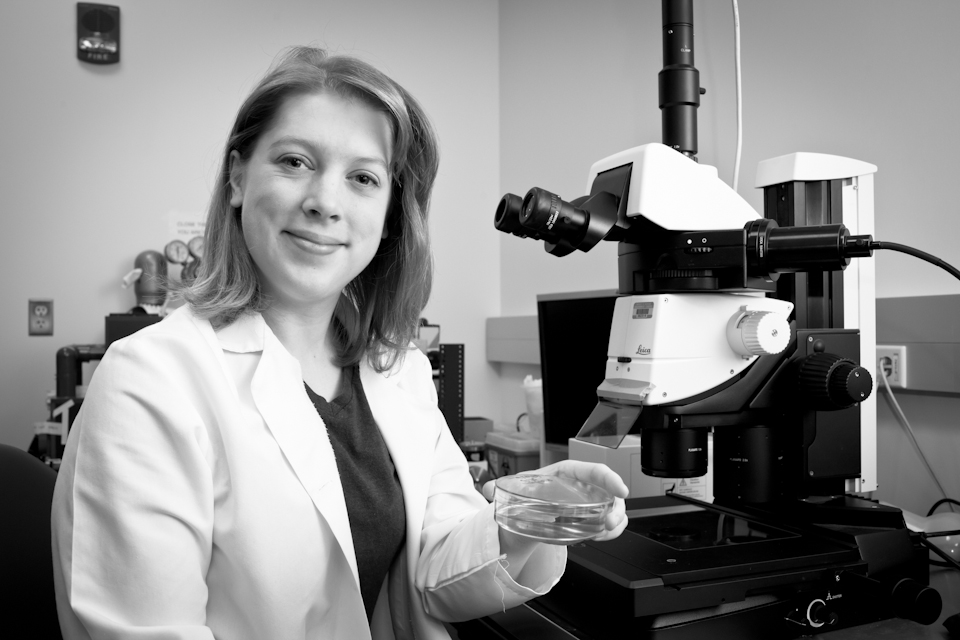 Kate is Midwest modesty and big city drive, all wrapped into one. Although she isn’t one to brag, she’s a classically trained musician—Vivaldi on the violin—not to mention Picasso with a pencil! This will be the last time you think of corn fields when you hear the word “Nebraska” because, if Kate’s smile hasn’t already won you over, her story will.

Trying to get to the core of her psyche, I open-endedly asked Kate what gets her up in the morning, and, without pause, she smirked and said, “My cat; he hits me on the face with his paws.” That was certainly the comedic version of her answer, and one of many quips made at the expense of her feline feller, Banjo Pete, but she followed up on a more somber note: “I see diseases,” she told me, and, with a single breath filled with succinctness and simplicity, she added, “I just think to myself, we should fix that.” 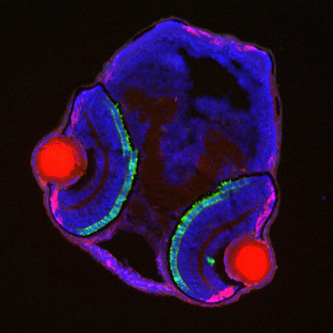 Growing up, Kate’s mom worked in the local hospital, and Kate was exposed to the reality of Alzheimer’s at an early age, which undoubtedly made an everlasting impression on her. It wasn’t until she hit the lab bench years later that Kate’s mindset transformed from planning to be a medical doctor, to knowing that she was bound for medical research. “I always thought I would be a doctor; it seemed the natural thing to do,” she said, “but the thought of discovering things was an overwhelming draw.”

There is certainly no lack of initiative behind Kate’s visceral urge for discoveries and treatments. Right now, she is studying zebrafish in Peter Hitchcock’s lab in order to better understand what factors are essential in regenerating brain connections. She shared some of her most recent work with me (image on the right), which involves making different cell types in the fishes' nervous system glow different colors, allowing her to track very specific changes over the course of development. “See, look!” she emoted, after navigating to some live, microscopic fish-in-a-dish for me to see. “They grow really fast, which means timing is really important for us.” While most researchers operate over a period of days, Kate operates on minutes, and you can tell she approaches this as a challenge rather than an impediment. In a few months, Kate will join Sammy Barmada’s lab with a continued neuropathic theme, where she will be tracking the growth of single cells, rather than whole organisms. 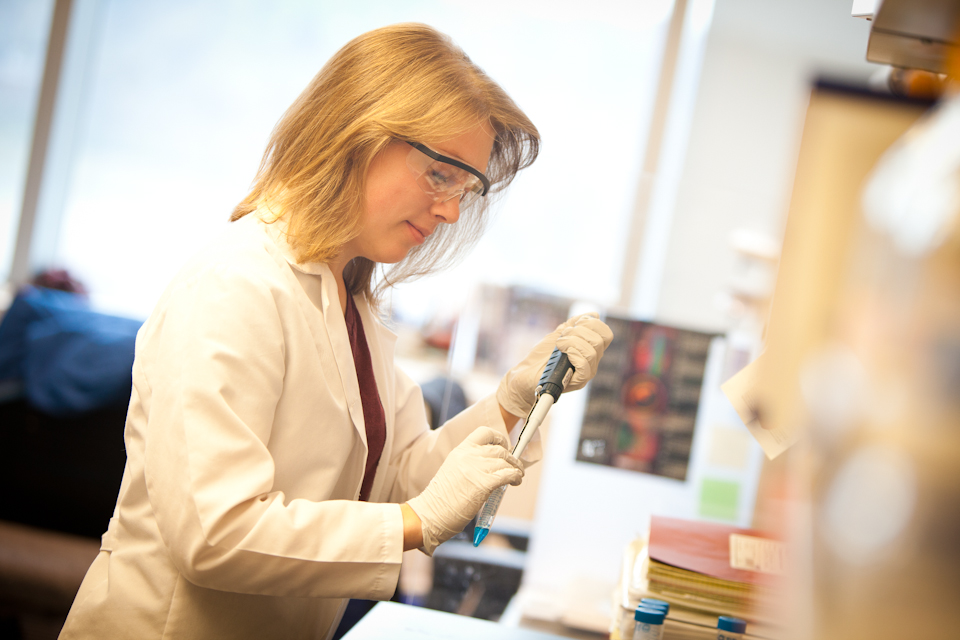 Meet Kate Weskamp, a first year neuroscience graduate student from Lincoln, Nebraska, where she was an INBRE Scholar at Nebraska Wesleyan University. She grew up with her two parents, who work in billing and pharmacy, and a younger brother, who is currently studying chemical engineering. She says Ann Arbor is a lot like home, with a bit more “buzz.”

Matt: Did you watch anything in particular as a kid?

Kate: Fantasia. I was enthralled with the dancing brooms.

Matt: What was your last dream about?

Kate: I was riding a St. Bernard through a forest full of redwoods. Hey, you asked for it!

Matt: What can we be sure will happen within 50 years?

Kate: We will know how a lot of diseases work, and everyone will be wearing those stupid Google glasses.

Kate: I like biking, reading, and cooking—even though I am not that great of a cook!

Kate: A small hairy man takes a ring from an active volcano, and risks life and limb to return it to his uncle Bilbo.

It was easy to become over-impressed with Kate’s research, to the point that I almost entirely forgot how much she has done (and is doing) outside of the lab. In the past, she has volunteered with the Special Olympics, Kids Against Hunger, Big Brothers Big Sisters, and Clinic with a Heart, as well as spearheading community service events in her hometown. When asked about her drive to better the lives of others, she humbly blamed it on having been “raised with Midwestern values,” going on to casually say, “It’s just always been part of my life.” Kate has made it a point to coordinate her volunteering activities with the changes in her life, now putting more of her time into organizations like Females Excelling More in Math, Engineering and Science (FEMMES), which reaches out to young girls in the nearby community, encouraging their interest in those subjects. Kate is also working with the on-campus group RELATE, which breaks down science for lay audiences.

There are some people you come across in life who simply overflow with enthusiasm and optimism, and Kate is one such individual. She is, I dare say, bubbly and tenacious. As I rode the bus with her to the Kellogg Eye Center, I met an older gentlemen, his face enveloped in a smile, who seemed to be waiting eagerly for his daily conversation with her. These passersby are who Kate considers her friends, and, for anyone who has the opportunity to be part of that circle, I highly recommend it.