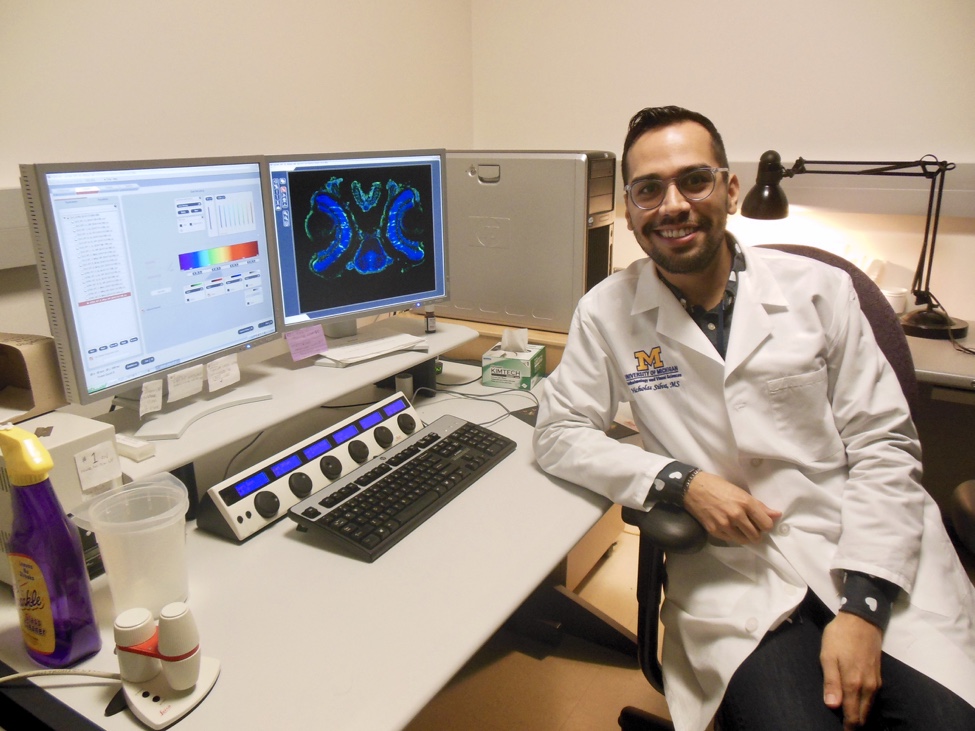 An Interview by Sharena Rice...

He’s a visionary, and not just in the sense that he researches mechanisms from the Muller glia governing photoreceptor regeneration.  Behind the lab coat, Nick finds time to help with two start-up student organizations, participate in IM sports, and he makes amazing chicken pot pies!

I visited Nick in his lab high up in Brehm Tower.  The lab has a beautiful view of the Huron River.  Nick showed me the setup of his desk: a diagram of how his dissertation on injury-induced photoreceptor regeneration relates to the big picture, a Care Bear figurine, one of his tropical plants, and personal good luck charms.

The making of a scientist...

After high school, Nick worked in medical billing for four years before heading back to school.  He knew if he wanted to attend college he would have to work and figure it out alone as a first-generation college student. It was a challenge for Nick to balance life as a full-time student and work full-time. Nick attended community college, eventually transferring to San Francisco State University (SFSU).

There were only two neuroscience labs at SFSU, both in popular demand. When Nick approached Dr. Megumi Fuse for a position in her lab, she said, “No”. Nick had a summer job back home in the San Fernando Valley and decided to contact his previous community college professor, who helped him get a summer research internship studying ataxia at Cal State University Northridge. Nick used this experience as a stepping-stone to finally get into Dr. Megumi Fuse’s research lab at SFSU, where he studied tissue regeneration in moths.  During this time, he was also taking a cellular neuroscience class that was taught by two talented neuroscience post-docs from UCSF, which further sparked his interest in research.  He stayed with Dr. Fuse for his master’s degree, and into his first semester she encouraged Nick to apply to PhD programs. In Dr. Fuse’s lab, Nick was awarded the NIH-MARC and NIH-RISE fellowships for his undergraduate and master’s degree, which he says really helped in his training for a PhD. 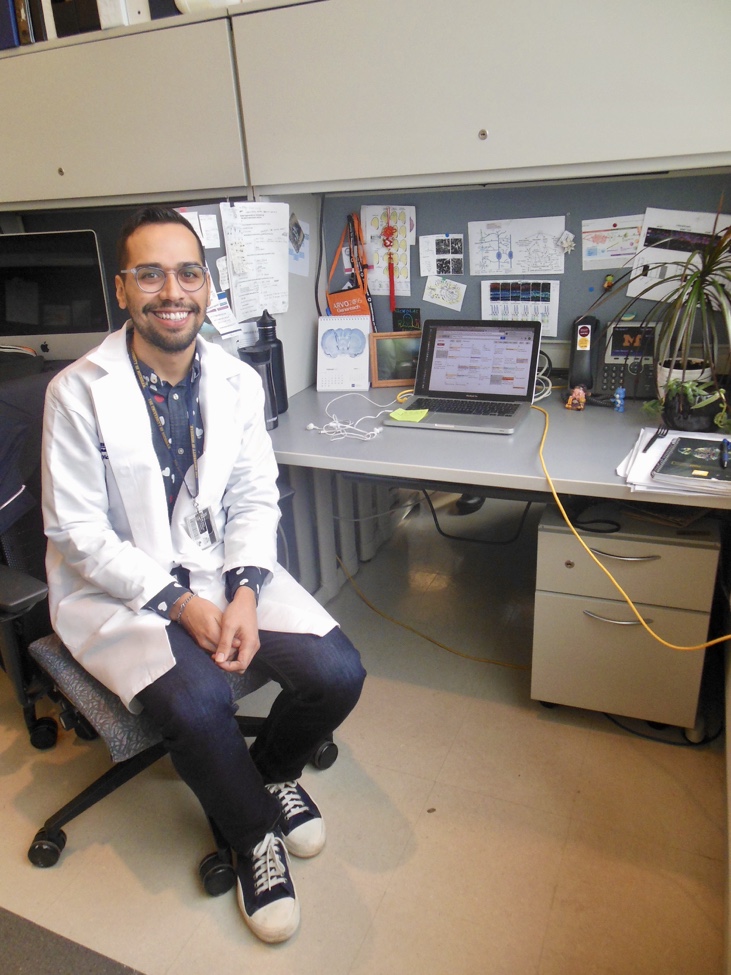 Nick came to the University of Michigan because it has many labs that study neuronal regeneration.  He was in another lab for three years before moving to Dr. Peter Hitchcock’s lab.  Now, Nick can see the light at the end of the tunnel for completing his dissertation.

Reaching Out & Giving Back

Nick had great mentors throughout his training felt and a desire to give back.  At SFSU, he worked with SEPAL to provide science lessons at Guadalupe Elementary School.  As graduate students at the University of Michigan, neuroscience and biopsychology friends Natalie Nevarez, Caitlin Rodrigues, Jonte Jones, Veronica Rios, and Nick discussed interest in starting a student organization for outreach during lunch at Sava’s. The group saw a need to engage local minority and low-income community centers through science education. Natalie and Caitlin took lead and friends followed in support.

They founded Mentoring Youth and Early Leaders In Neuroscience (M.Y.E.L.I.N.).  M.Y.E.L.I.N. is an outreach organization that develops programs for science outreach.  This brainchild has been thriving since 2013.  Nick leads M.Y.E.L.I.N.’s college preparation workshops and training other members for these workshops.  A few years later, when Carla Ramos approached Nick to help start up U-M’s Society for the Advancement of Hispanics/Chicanos and Native Americans in Science (SACNAS) chapter, he said, “Of course”. Now Nick serves as its outreach chair.

In the summer of 2014, Nick ventured to Kenya through the Michigan Education Corps with fellow neuroscience friend Chelsea Cummiford and Dr. Daniel Clauw. They had grand ideas to provide and teach biomedical graduate level courses at Meru University.  Nick was responsible for creating physiology course material.  The team felt humbled pretty quickly, as power outages prevented them giving presentations and observing the lack of resources for education in the community.  They stayed at an orphanage, where he was inspired by the students’ passion and persistence for higher education. 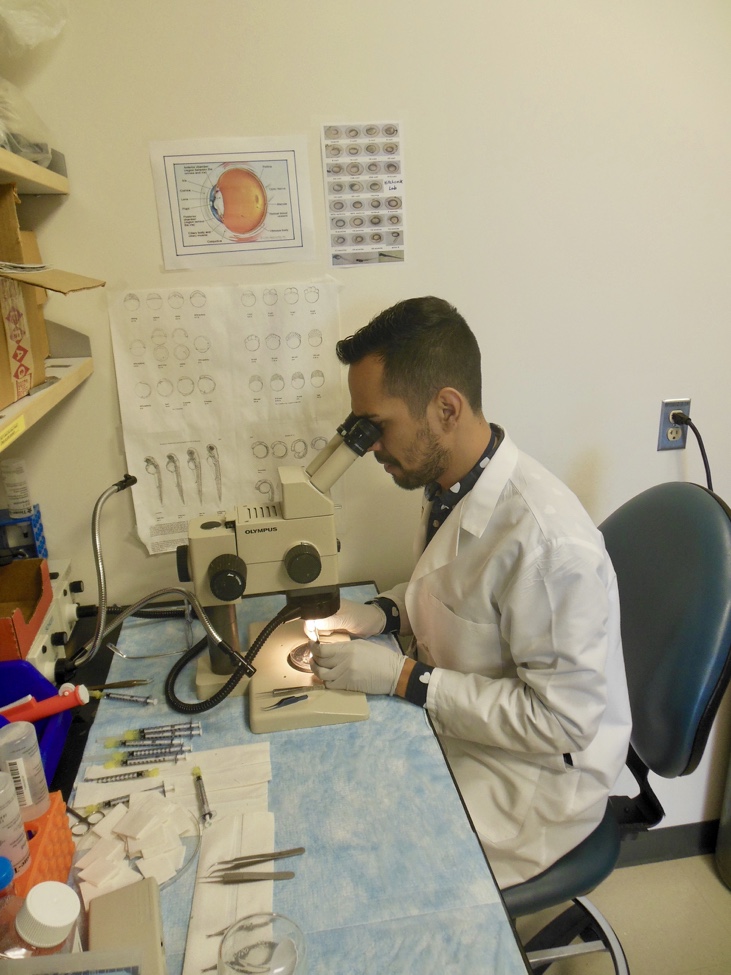 This past summer, Nick instructed an intensive 3-week neuroscience course with Johns Hopkins Center for Talented Youth. The students in the course were between 8th and 12th grade, but some of them already had scientific research experience.  Nick was the youngest instructor there, filling the shoes of the USC neurobiology professor who used to teach the course.  Nick had a teaching assistant and a budget, and he had to create a detailed syllabus complete with lesson plans for lecture and lab.  He drew from his network with University of Michigan to recruit neuroscience guest lectures.  Nick learned and grew a lot from this experience, which he said was exhausting but also rewarding. 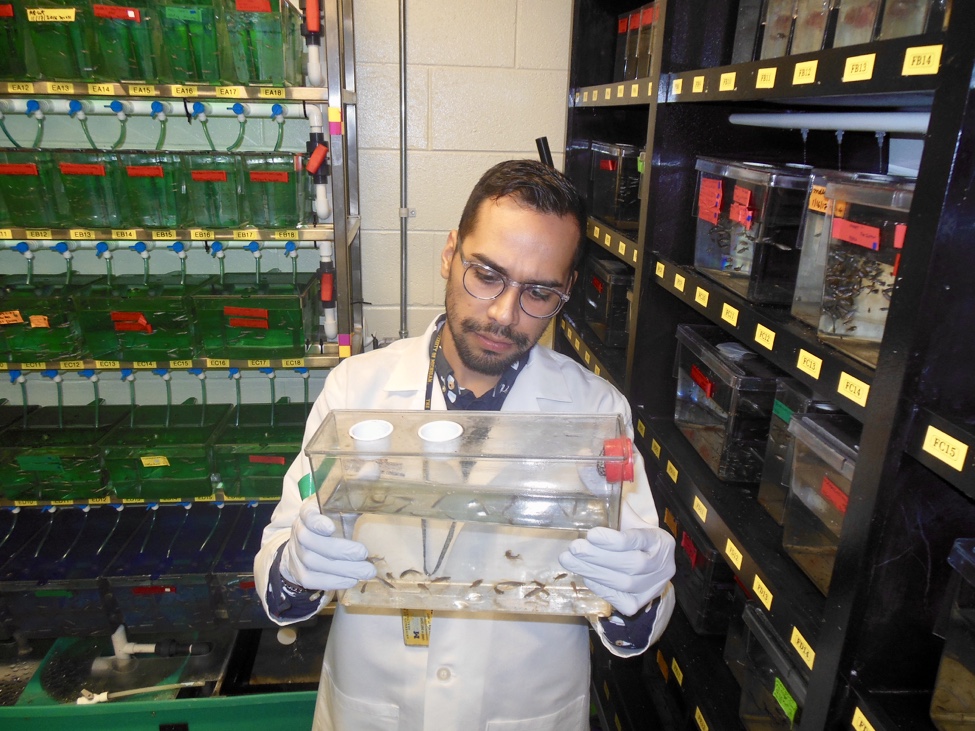 In the end, I asked, “What’s your greatest life lesson?” “Persistence and passion will pretty much trump anything,” said Nick.  “Don’t be afraid to fail.  Try again and try again.  And try again.”