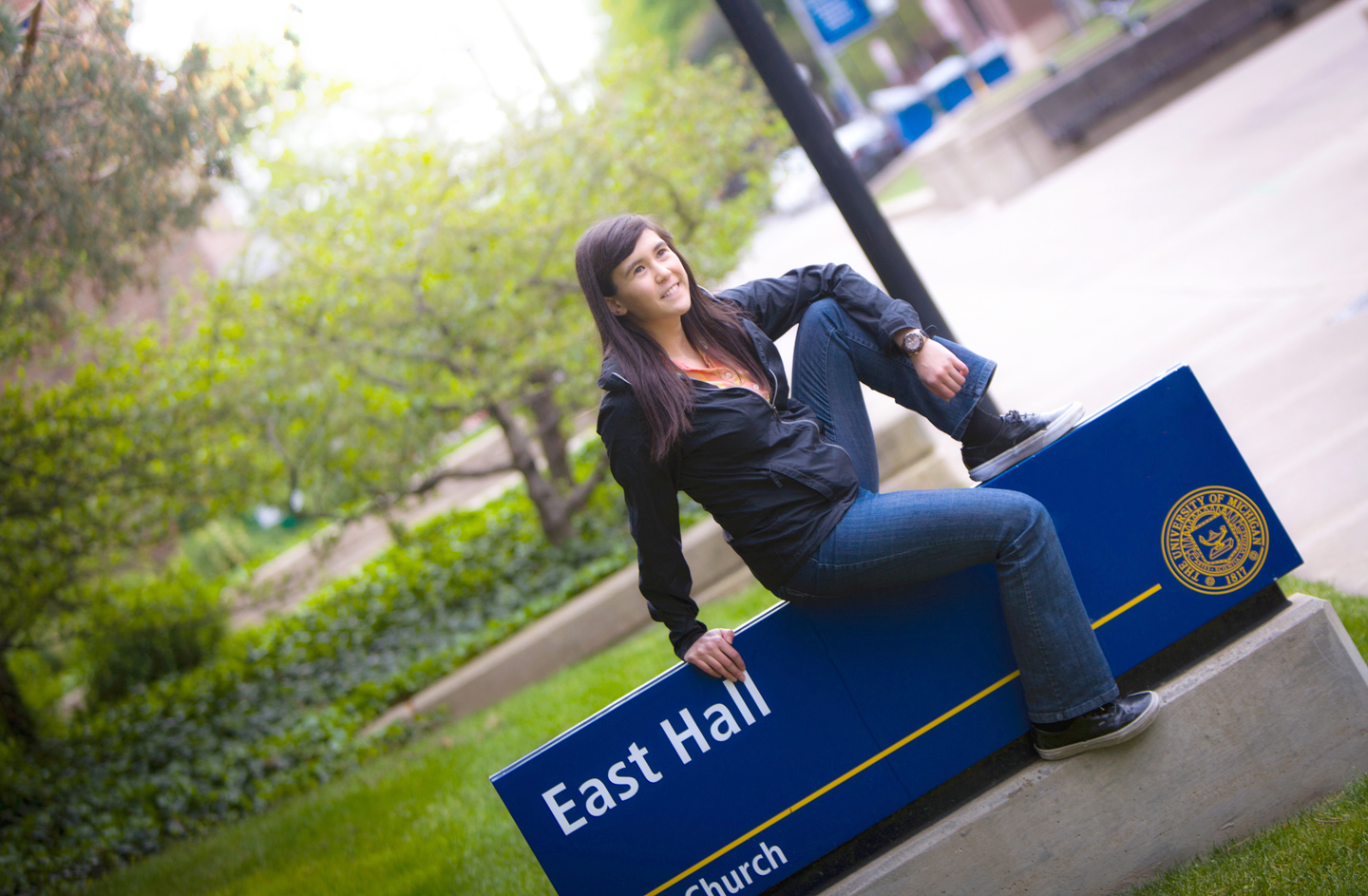 Sharena Rice is fantastic. She is a punster-calligrapher-scientist. Her positively contagious personality and perspective on life might just make your day.

We met in a small, dark room in East Hall. It was outfitted with machinery atop a giant air table, two computer monitors, and shelves of electronics equipment.  These, along with the red lights overhead, clearly signaled that this room was built for more than humans. “I’m studying the neural correlates of speed in mice” she began, “we use these computers to generate a virtual environment, and then they run on this ball to navigate through what they see on the screen.” Sharena explained that the research was focused on the intersection of the visual and motor systems and will use in-vivo electrophysiology from the hippocampus, primary visual cortex and motor cortex to learn about the visuomotor, “speed circuit” in the brain.

So, what is the advantage of using a virtual world? “It’s not only that we can change features of that world on the fly, but we can create a mismatch between how fast the environment is moving and how fast the mouse is running.” In virtual reality, Sharena’s mice are head-fixed.  This keeps them on the spherical treadmill as they run.  It will also allow her and the other members of Dr. Omar Ahmed’s lab to perform two-photon imaging experiments in awake, behaving animals.

Insights from her work might explain the phenomenal feeling we get while walking inside a moving train and looking out the windows. More importantly, it might address how the mammalian brain adapts when the visual environment fails to match the physical expectation. This could apply to the increasingly-popular virtual reality systems, to special human populations like astronauts, or be used to investigate disorders of gait or proprioception. 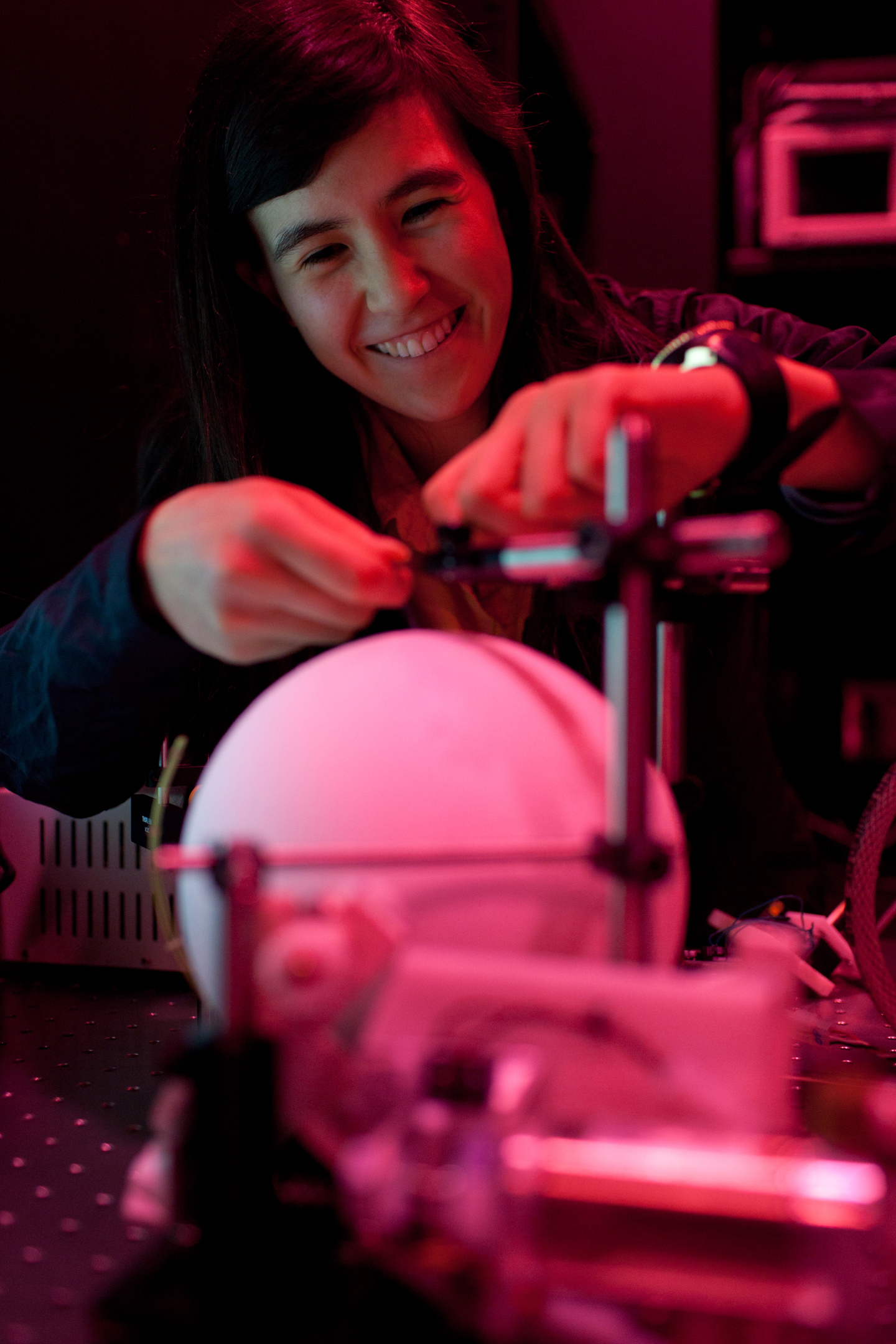 Looking down at the silver aluminum table, I next asked Sharena to tell me about the equipment she and her team in Omar Ahmed’s lab had built to make her research possible. She grabbed two circuits boards, one in each hand with wires sprouting out the gaps of her fingers, and thrust them forwards, “This is the Arduino that controls the relays,” she added, “it talks with this computer over here running MATLAB.” Sharena wasn’t just asking great questions, she was enabling them to be asked.

Sharena owes a lot of her technically curious nature to her parents, both electrical engineers, still living near Thousand Oaks, California, about one hour north of Los Angeles. She recalls her childhood there, “when I was ten, they got me one of those electricity experiment kits,” but soon after, Sharena said, “I had built all the circuits in the instructions.” In the true spirit of an engineer, she just kept wiring things together (but without taking anything apart) until, “they were so wired that they no longer seemed to do anything.” Perhaps for the first time in her life, Sharena began to think about brain function terms of circuitry, and saw in front of her one potential model of dysfunction, due to over-wiring.

Where it Really Began

It would be easy to imagine that these were the formidable experiences that led Sharena to neuroscience, but they are absolutely footnotes to that journey. Her story is much more complex, and it develops in her early teens when she became curious about the thoughts and behaviors of “regular” people. “I began to observe other people’s behavior, wondering why they do what they do.” At just thirteen, she had turned her observations into what she calls, “a documentary,” and “by the end of writing it, I understood much more about how people thought.”

Sharena was kind enough to share these writings, and in their whole, they offer exquisite detail into her own process of thought. They struck me as everything an alien species would document about humans. From why we laugh, to how often we blink. 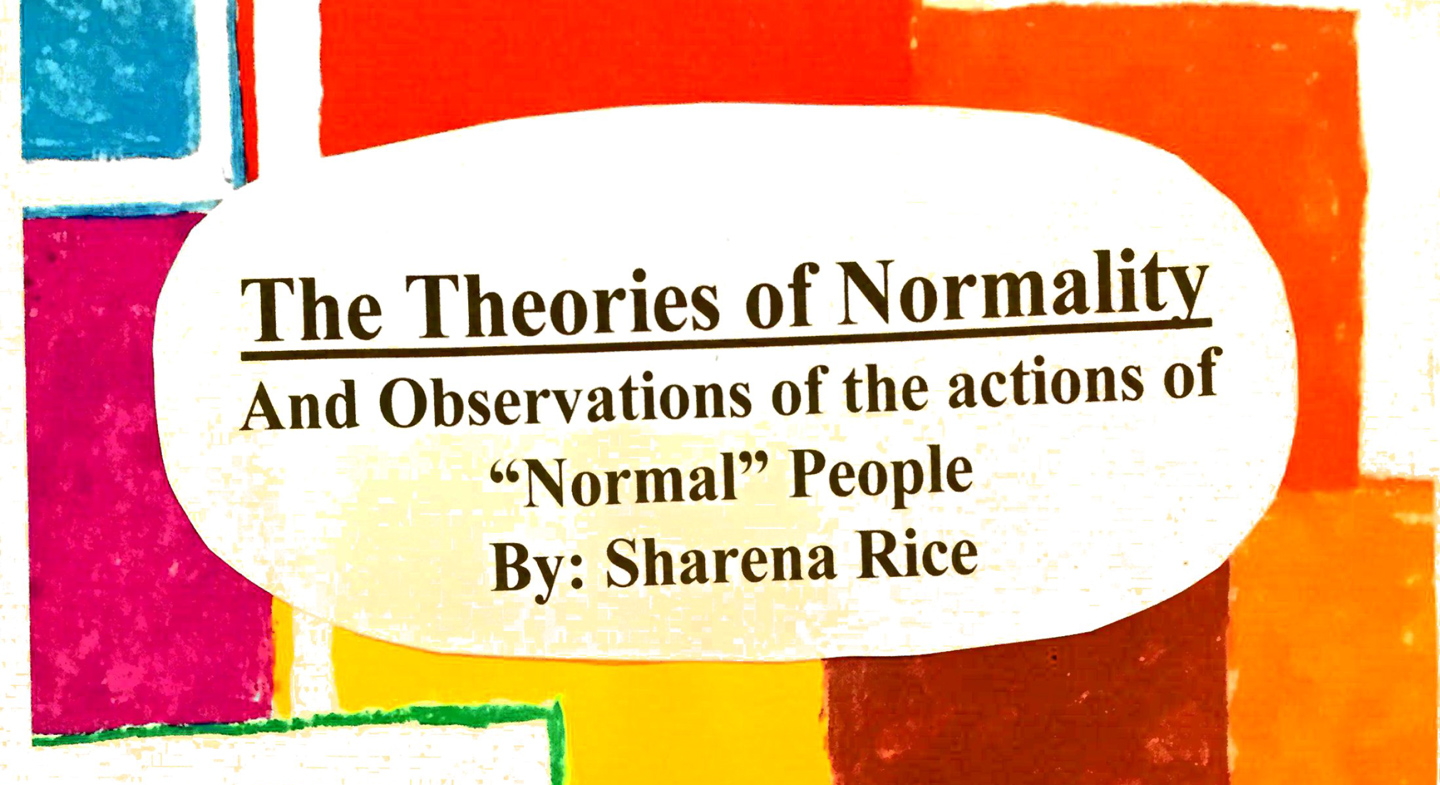 Thought continued to fascinate Sharena. She gravitated towards the psychology section at the bookstore. “My parents took me there every Sunday,” Sharena said, “it was like our church.” There’s also no doubt that it shaped her decision to minor in philosophy and psychology in undergrad, while majoring in biochemistry and molecular biology. Sharena explained, “Thought is the intersection of all those things.” 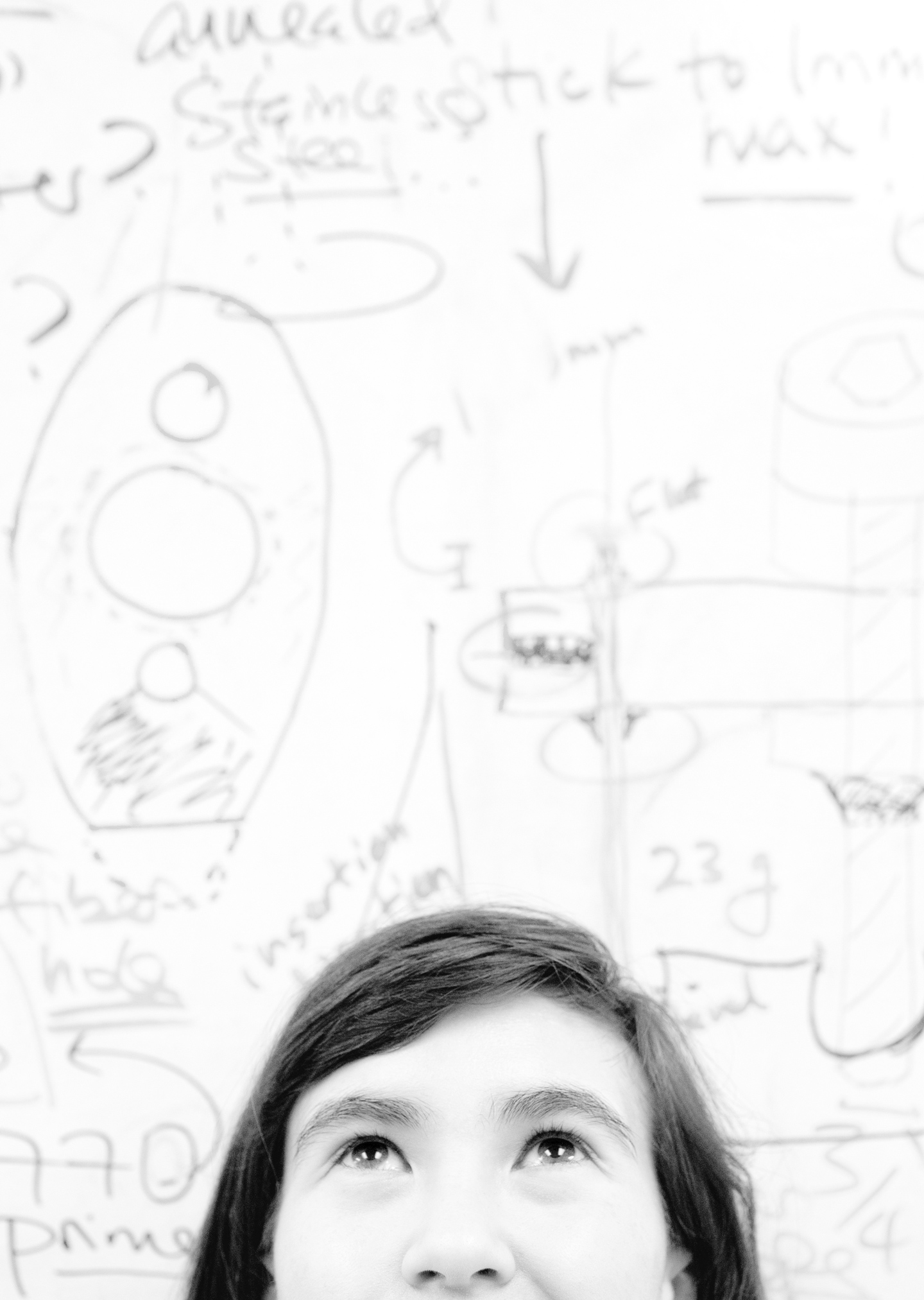 An expert on other’s thoughts, I was interested in how Sharena thought about life. Sharena is known for answering a casual, how are you, with an exuberant, “I am fantastic!” It was finally time to ask her, politely, “is that just a face you wear?” She took a breath, perhaps caught off guard, as I challenged a most outstanding aspect of her character. “No, no it’s not,” she said in a small voice. “I didn’t have many friends when I was younger, so I’ve always done things how I want to,” she explained, “I decided early on, if I have the choice to make today good or bad, I’ll make it good.”

In a room of twenty people, or one hundred, or a thousand, you would be hard pressed to find a more genuinely positive person than Sharena. It is not naive optimism, nor is she interested in spinning reality so that the glass is half full. Rather, it is that she has consciously analyzed systems of thought, striving for the truth.  She believes in rationality as a route to happiness, as it can be used to create better situations. “If you think today will be a good day, you will naturally find all the good things about that day,” she divulged, “and if you think it will be a bad day, you’ll find the bad things.” 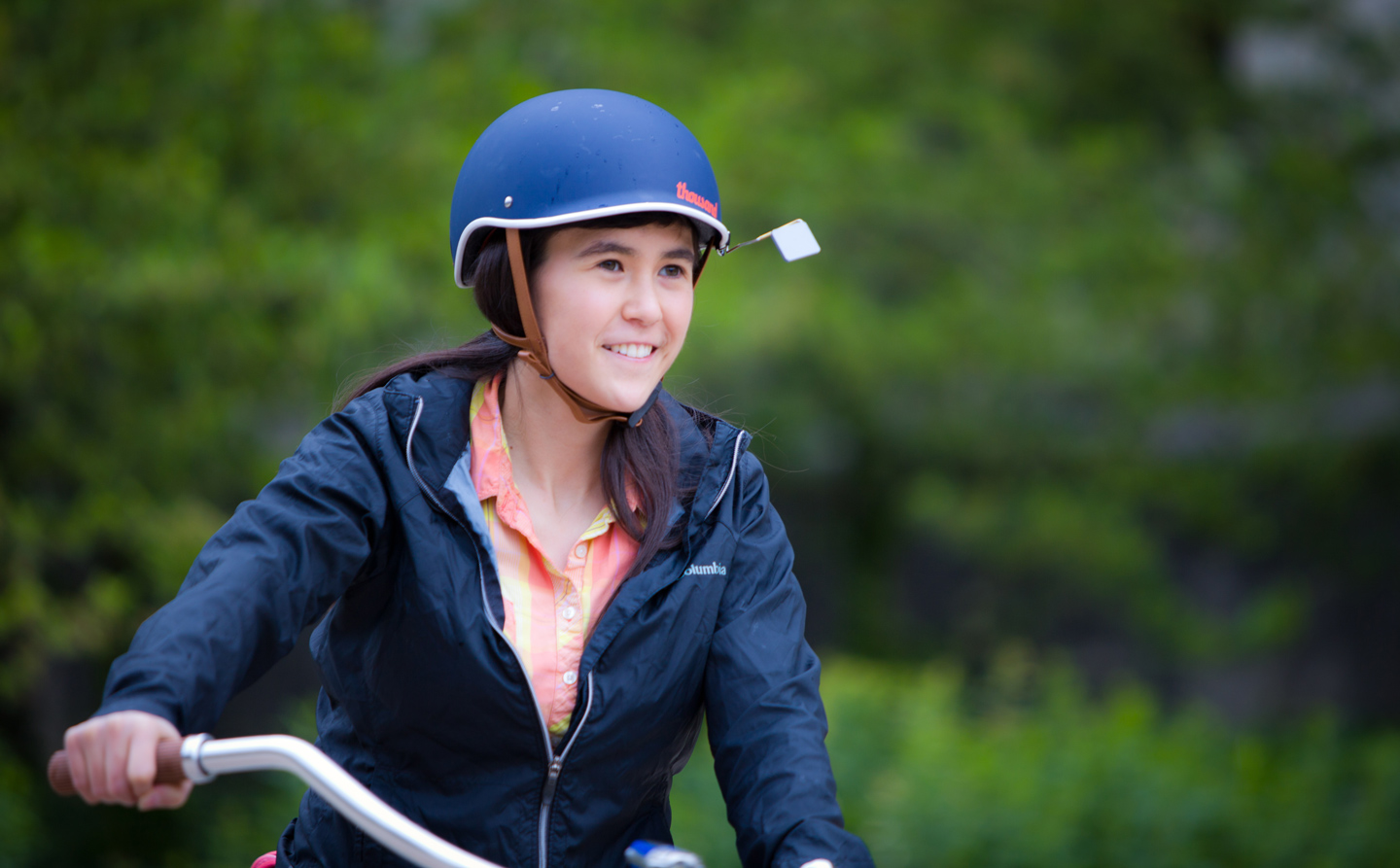 A week after interviewing Sharena, I came to my desk on a Sunday afternoon, and on it was a small box wrapped in loose leaf. In the box was an eco-friendly beverage cup for keeping at my desk. Written on the paper was a playful note, in perfect handwriting, only backwards and upside down, a natural skill Sharena told me she has had since childhood. That is Sharena Rice, a stroke of rare gentility, ethereal talent, and the truest of all reminders to embrace all the good life has to offer.